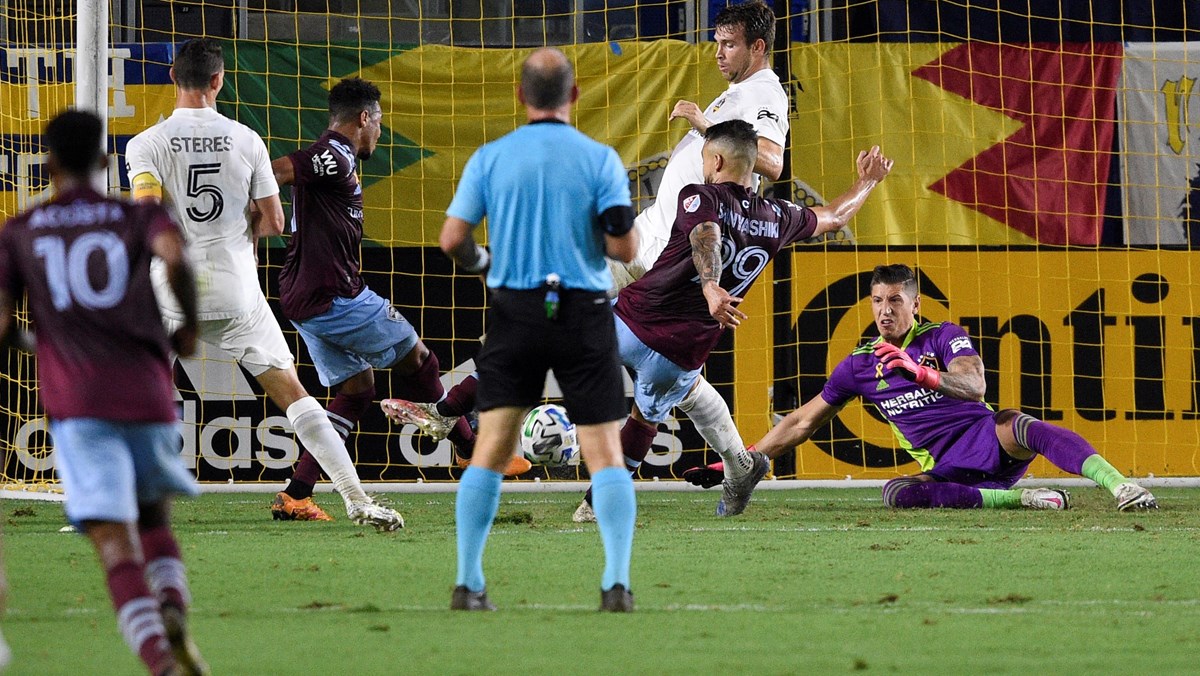 A goal in each half carried the Colorado Rapids to a comfortable 2-0 win at LA Galaxy on Saturday night, as they ended their three-game road swing on a high, writes Richard Fleming.

The Rapids controlled much of the contest, against one of the form teams in MLS, and off the back of a surprise 4-1 loss in Dallas just three days earlier.

Cole Bassett gave the Rapids a deserved lead at the break, ghosting in behind the Galaxy back-line to finish off a fine cross from fellow-Homegrown Sam Vines in the 40th minute.

Bassett continues to have his best-ever season in MLS. He now has three goals and three assists from just eight games.

"Vinesy literally put it on a platter tonight and I just had to finish it off," Bassett admitted. "I should have had a couple more, to be honest, when I cut inside, but definitely got to work on that in practice over the next couple of days.

"I think it’s due to the way that we’re playing as a team right now, I think our movement is really good, our positioning and it’s allowing me to get into really good spots in the attacking third and then it is just up to me to finish them off."

Jonathan Lewis, who earlier in the second half had a goal ruled out for offside, was awarded his fourth of the season but only after a lengthy delay as video review was required. Braian Galvan was initially flagged offside, but the review noted Daniel Steres kept him on, and the goal stood.

That Lewis goal came 12 minutes from time, and after the Galaxy had lost Julian Araujo for a second yellow card. The 22-year-old defender was fortunate not to have gone in the referee’s book sooner, but then managed to do so twice in three minutes, and his night was over.

Lewis also smashed an effort against the crossbar, while the energetic Kellyn Acosta rattled the post. David Bingham, who cut an increasingly frustrated figure as the second half wore on, also made a remarkable instinctive save, otherwise the scoreline could have been much greater.

LA Galaxy even brought on their top options off the bench in Javier ‘Chicharito’ Hernandez and Jonathan dos Santos, but both were barely mentioned in the - including stoppage time - more than 40 minutes on the field.

Indeed, the Galaxy were most threatening when gifted the ball by some sloppy passes by the Rapids. Bassett, Vines, William Yarbrough, and Danny Wilson to name but four were all guilty. Fortunately, the defensive coverage was solid and the Galaxy were blanked for a second successive weekend, and beaten for the first time in seven outings.

Goalscorer Bassett said: "Great win from us. It is not an easy place to go on the road here and pick up a two-nil win and keep a clean sheet.

"Proud of the boys tonight that we came here and played the way we wanted to and eventually got the goals in the end that we deserved and came away with three points.”

The only downside from this game was the loss to injury of Younes Namli and Wilson. Namli was helped off with what appeared a hamstring issue, while Wilson limped off complaining of a calf injury. They could be a doubt for the home game with San Jose Earthquakes on Wednesday (7pm).

With the win, the Rapids collected six points from their three road games, keeping clean sheets in both of their victories, the first of which brought the Rocky Mountain Cup back to Colorado.

Saturday’s success also lifted the Rapids back up into the playoff conversation (STANDINGS). They sit sixth, on 16 points from 12 games (eight teams make the playoffs from the Western Conference). With back-to-back home games coming up, they will be keen to consolidate their place above the playoff line.