Ahead of the 2021 MLS season, Richard Fleming introduces us to the teams set to face the Colorado Rapids. They will tackle Real Salt Lake three times throughout this year, hoping to retain the Rocky Mountain Cup. Only once previously have they lifted the cup in back-to-back seasons, the first two years of the rivalry, in 2005 and 2006.

History with the Rapids
It is 16 years ago next week that the Rapids first faced Real Salt Lake, at Rice-Eccles Stadium. Brian Dunseth scored in a 1-0 win for the newcomers from across the Rockies, though the Rapids would claim the inaugural Rocky Mountain Cup with victory in the three subsequent games that year.

The rivalry ignited the following season when, with both sides chasing a playoff berth, and with the RMC on the line, the Rapids went back to Rice-Eccles and claimed victory through a Nicolas Hernandez goal. The game has since been remembered for the postgame confrontation between Pablo Mastroeni and then-RSL owner Dave Checketts. RSL would claim the cup in 2007 and would not let go until 2013 when a Jaime Castrillon goal dragged the trophy back to Colorado. The Rapids would lift it again in 2015, on goal difference, and that goal happened to be a last-minute breakaway for Juan Ramirez with the score at 2-1 and after the RSL ‘keeper had ventured forward for a corner.

After that, four further years of watching Real Salt Lake tie their colors to the cup, until the most remarkable and unlikely turnaround in 2020. Played as a two-game series, the Rapids were humbled 4-1 at home on August 22, with RSL convinced they had secured the Rocky Mountain Cup for a record fifth year in a row (see below).

Their confidence appeared well-placed. After all, not only had the Rapids never scored more than two goals at Rio Tinto Stadium, they had never actually won there. Their previous success in Utah had come at Rice-Eccles in 2007.

What unfolded was one for the ages. Not only did the Rapids win, but they blew RSL away, putting away five goals without reply to reclaim the Rocky Mountain Cup in the most dramatic fashion. 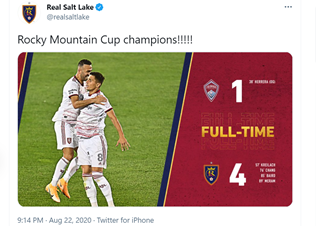 This season, the two teams meet three times, once in Colorado and twice in Utah. Real Salt Lake will also have a familiar face among their ranks; the man who riled them so all those years ago. Former Rapids captain and head coach, Pablo Mastroeni, is now an assistant coach at RSL. Yet another twist in the tale.

2020 Season
Early word out of Rio Tinto last year was that this was a side which struggled to know where the goal was, and so it was. Their 25 goals were the lowest return of any team in the Western Conference, which makes the fact that they managed six against the Rapids in two games all the more perplexing.

They were shutout nine times in 22 games. They managed multi-goal games on just seven occasions.

RSL grabbed their first win of the season with the first game of the MLS is Back tournament, beating the Rapids 2-0. They went scoreless in their remaining group games, in a return to form.

Juarez’s men began well when MLS resumed in August, scoring 10 goals in three games (1-0-2) but the 4-0 loss at Minnesota in early September signaled an inconsistent run which would ultimately derail their season. They managed wins over LAFC, LA Galaxy, and Portland Timbers, but they also stumbled to home losses – notably the 5-0 humbling by the Rapids – when historically they have been so strong in Sandy.

Their season-long issue haunted them down the stretch, as they were good for just one goal and one point in their final four games.

Real Salt Lake finished next to bottom of the Western Conference, their lowest finish since 2015 (when ending one place above the basement, occupied by the Rapids), and a far cry from 2019 when they sat third at the end of the regular season.

Offseason Highlights
For the first time in Rocky Mountain Cup history, the name Kyle Beckerman will not be associated – as a player anyway – with either side. He announced his retirement in late December after 21 seasons in MLS, including five-and-a-half with the Rapids and 13-and-a-half at RSL.

Beckerman was one of three players to hang up their boots. Luke Mulholland also called it a day. The Englishman spent seven years with RSL and has since taken on the role of scout for the club. Also, central defender Nedum Onuoha, who joined the Claret and Cobalt in 2018, has returned to England and is working in the media.

The big signing for Freddy Juarez’s side is that of USA striker Bobby Wood. He will arrive on July 1 after his contract at Hamburg of Germany’s 2. Bundesliga, just in time for the first meeting of the year with the Rapids on July 24.

Another attack-minded player to land in Utah is winger Anderson Julio. He has joined on loan from Liga MX side San Luis. Prior to that, he was with LDU Quito in his native Ecuador.

Homegrown attacker Corey Baird, the MLS Rookie of the Year in 2018, left for LAFC in January, in exchange for $500,000 General Allocation Money - spread across 2021 and 2022 - a 2021 international roster spot and future considerations.

Real Salt Lake did bolster its backroom staff. As well as Mastroeni in as an assistant coach, the runners-up in last year’s Rocky Mountain Cup have brought in Kurt Schmid as technical director, and Matt Taylor as another assistant to Juarez. Assistant coach Tyrone Marshall left for FC Cincinnati.

Players To Watch
Anderson Julio: he made only eight starts in Mexico after being acquired in January of 2020. Prior to his time at San Luis, he starred for Ecuadorian side LDU Quito, scoring 27 goals, and adding 26 assists in 134 appearances in all competitions.

David Ochoa: his shocking error during the Olympic qualifiers aside, could this be the year that homegrown goalkeeper Ochoa steps up and grabs the gloves at RSL? The shadow of Nick Rimando still lurks in the corridors of Rio Tinto, but Ochoa – though only just 20 – appears to have most of the attributes to back-up the number one on his jersey. Brave, a great shot stopper, and commanding … he may need to work on his first touch, though.

Jeizon Ramírez: a second season beckons for this Young Designated Player. He will be eager for more than the 80 minutes across 10 substitute appearances managed in 2020. That may be tricky for the 20-year-old from Venezuela, with the arrival of Anderson Julio but the club must have seen something in him to sign him as Young DP.

Bobby Wood: Hawaii-born Wood will move to MLS for the first time, having spent his entire career in Germany, playing at 1860 Munich, Union Berlin, Hannover, and Hamburg. A teammate of Damir Kreilach at Union Berlin, the 28-year-old has 13 goals in 45 appearances for the US national side.

Prior to the 5-0 win over Real Salt Lake last September, the Rapids had gone seven games without success against their neighbors (0-6-1).

That dry spell for the Rapids included a 6-0 hammering at home in August 2018. With the Rocky Mountain Cup still a possibility, the Rapids did themselves few favors in getting two players sent off before the break. Niki Jackson – making his first, and only, start – saw red just nine minutes in. It was also his birthday. Nana Boateng followed on the stroke of halftime when collecting his second booking.

The first meeting, on April 16, 2005 marked the MLS debut of Rapids midfielder Terry Cooke. The former Manchester United and Man City player came on for Kyle Beckerman 61 minutes into the contest.

Names in the Rapids lineup for that game in 2005 included Nat Borchers, Ritchie Kotschau, and Kyle Beckerman, who would all go on to play for RSL. Pablo Mastroeni and Wolde Harris were also among the starters. RSL had Clint Mathis, who would join the Rapids for 2006.