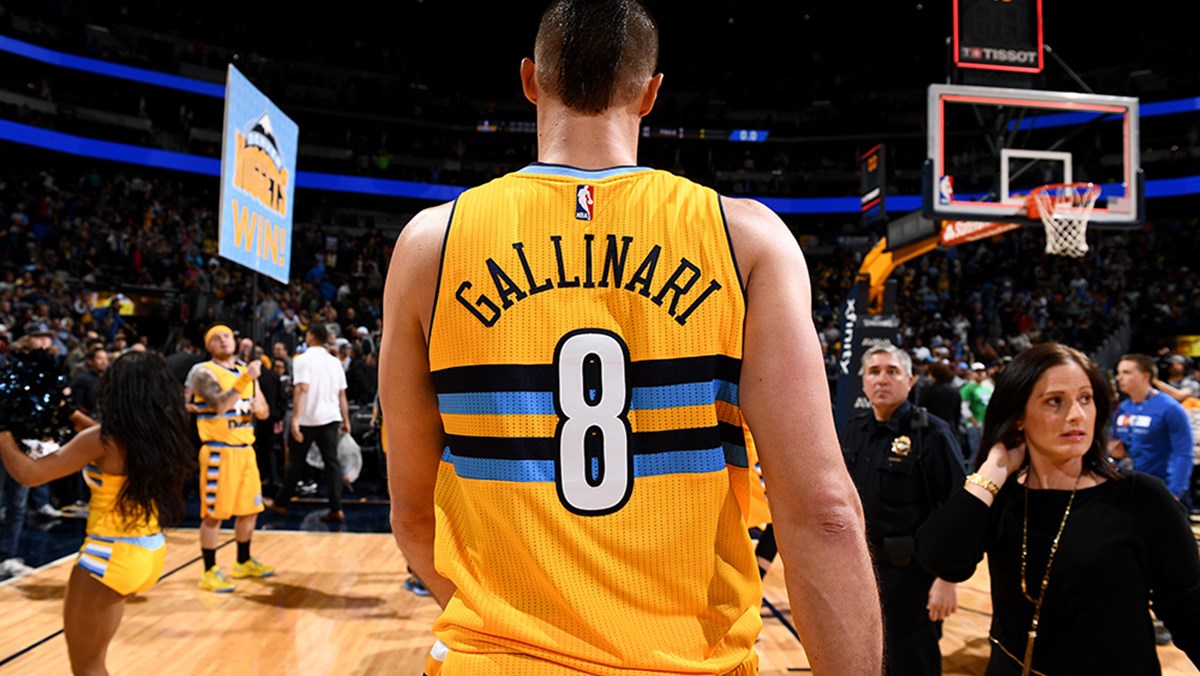 And then there was one.

On Thursday, Danilo Gallinari’s exit from the Denver Nuggets became official, and it is more significant than you think. Gallinari – along with Wilson Chandler – were the longest-tenured Nuggets on the roster. Since 2000, only seven players played more seasons in Denver than Gallinari.

That’s the list. It means there was a definite Danilo Gallinari Era in Denver. The question is: How will it be remembered? That answer could be all over the board. He finished his (appropriately) 303 games third all-time on both the Nuggets’ 3-pointers made (535) and taken (1,463) lists. He is sixth in team history in free throw percentage (86.4), fourth in turnover percentage (9.1), fourth in offensive rating (118.2) and 10th in offensive win shares (23.5), according to Basketball Reference.

Gallinari was the Nuggets’ leading scorer in each of the last two seasons. He went 162-141 (.534) in his time with the Nuggets, with winning records in games in which he played in three of his seasons in Denver, including going 9-5 in 2011, the year he was traded to the Nuggets. He was 4-8 in the playoffs with two first-round series losses, but it is the series he missed – the first-round series against Golden State in 2013 – that observers will remember most. The Nuggets lost that series, and the Warriors rose to being two-time champions with a core that is among the best the league has ever seen.

What if Gallinari, who was the Nuggets’ second-leading scorer that season, had played? The third-seeded Nuggets needed more scoring punch, and he’d been the player that could have given it to them. The prevailing opinion is if Gallinari had played, the Nuggets would have won, no matter how well the Warriors were playing. His presence, then, would have changed the course of what has happened to both franchises since.

But Gallinari, apparently, was destined for a different kind of role for the Nuggets. In that series, he would have been a savior, but what he turned out to be was a bridge, a steadying force that endured difficult years since that 2012-13 season and helped guide the team back to the doorstep of being a bonafide playoff contender. He was on the court for 31 of the Nuggets’ 40 wins last season. They don’t get to 40 without his 18.2 points per game, the second-highest average of his career. The Nuggets needed his ability to get to the free throw line almost at will in order to maintain control of some games and help get them back into others. They needed his public comments that the team needed to have bigger goals in mind. He solidified his commitment to the team by agreeing, in his last contract extension, to a bit of a hometown discount.

Last season didn’t go exactly as Gallinari had hoped personally. His role diminished some as Nikola Jokic’s power and influence in the offensive system rose. Gallinari’s time with the Nuggets might be underappreciated by many, but not in the eyes of the decision-makers who helped him move on to the L.A. Clippers for what will be the highest average salary of his career, based on media reports of his new contract figures.

"Since we acquired Danilo in 2011, he has exemplified every positive aspect of the organization we are continuing to build,” said President and Governor Josh Kroenke in a statement on Thursday. “His hard work, professionalism, and efforts in the Denver community during his time with us will forever make him a fan favorite. On behalf of Nuggets fans everywhere and our entire organization, I would like to thank him for everything he did during his time with us and wish him nothing but the best in the future both in life and in basketball."

It turns out, he was as important as he was thought to be, just in a different way than it was expected to go down. His legacy with the Nuggets lies in how the team plays from here, if his competitiveness filtered through younger players, if his calm under pressure and his honesty in times of need is carried on by those left who played alongside him.

Gallinari’s departure leaves only Chandler as the last player standing from the 2011 trade of Carmelo Anthony to the New York Knicks. But his impact on the team is likely to live on long after he’s gone.