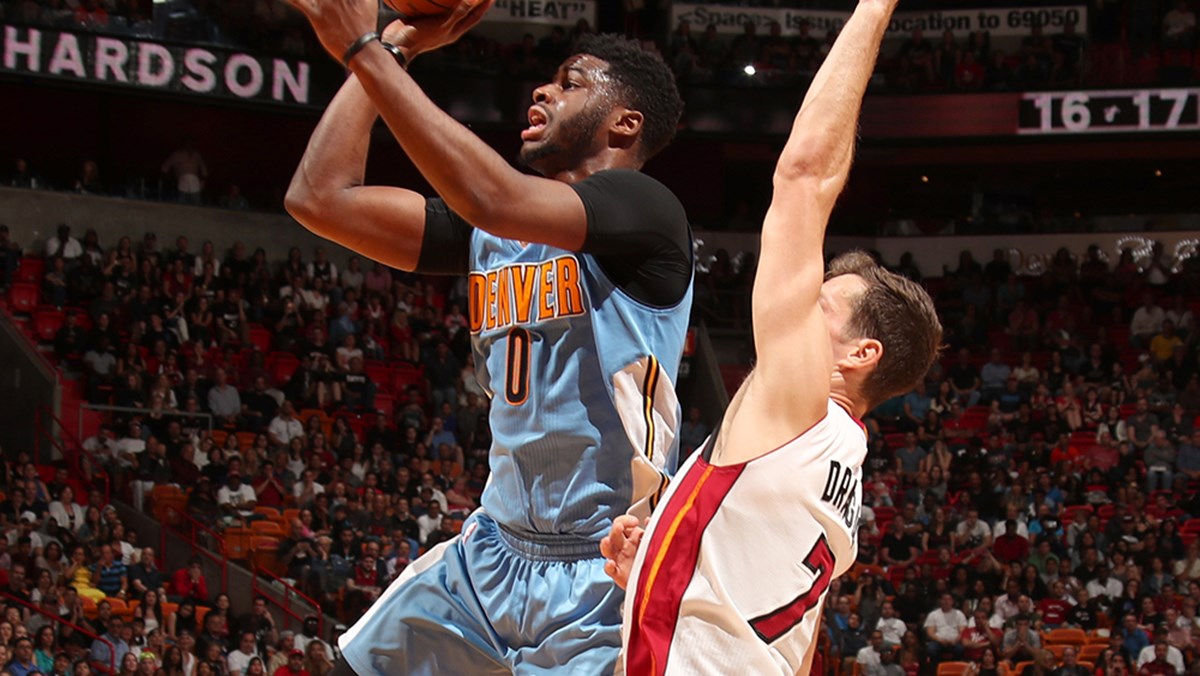 The Significance of Emmanuel Mudiay's Big Night in Miami

MIAMI – By the time media was let into the locker room after the Nuggets win over Miami on Sunday night, Emmanuel Mudiay, the man of the hour, was long gone. He’d let his game do all of the talking in a big victory. Additional words weren’t necessary.

And yet he was the talk of the locker room after putting up 17 points, nine assists and four rebounds in the Nuggets’, which kept the team two games behind Portland for eighth spot in the Western Conference playoffs.

He shot a high percentage – 55.5 percent. He made nine of 10 free throws. He made big plays when the Nuggets needed them most. None of those plays were bigger than two in the final 1:17 of the game. His shot jump shot at 1:17 put the brakes on a hard-charging Heat team that had just gotten a huge 3-point shot from Josh Richardson to cut the Nuggets lead to one possession – three points. Then, with 41 seconds left, he blocked a Tyler Johnson shot attempt and the Nuggets rebounded, shaved 24 more seconds off the clock and held on to win.

The significance of it all was not lost on anyone. Mudiay had not played much of late, but continued to work hard behind the scenes. He was a regular participant in 3-on-3 games hours before the actual game that night began. None of the last couple of months has been easy for him. But he stayed engaged, and on Sunday it paid off.

“I’m not saying this to make myself sound like I’m really smart: I had no doubt that he was going to play well (Sunday night),” Nuggets coach Michael Malone said. “He’s played in many big games, he started many big games for us. And he’s stayed ready. If he hadn’t been working, if he hadn’t been staying engaged, I would have been worried.

“Emmanuel’s work ethic has been tremendous, and I think it speaks to his mental toughness, his poise and his ‘I’m going to control what I can control, tonight I’m going to play minutes.’ And he brought us home. And he made some big, big plays for us offensively and defensively. So, that’s what you want to see from young players. We don’t win the game without Emmanuel Mudiay.”

It was his first game scoring in double figures since Feb. 1 (14 points vs. Memphis). Mudiay’s nine assists tied his second-highest total in any game this season. His nine free throw makes were his second-most in any game this season and his 90 percent success rate was also second only to a 10-of-10 free throw performance against Atlanta on Dec. 23.

“It’s hard to come in and play like that when you haven’t been playing consistent minutes for a long time,” teammate Wilson Chandler said. “That was huge for us. Without him, we don’t win that game.”

Prototypical Nuggets. About an hour before the Nuggets would defeat Miami, Heat coach Erik Spoelstra was asked about his impression of them. What he said would bring smiles to Nuggets coaches from Michael Malone to Doug Moe.

“A prolific offensive team, they really are,” Spoelstra said. “Obviously a lot of the narrative is (Nikola) Jokic right now because of his playmaking ability up top that really spreads the floor and gives you so many more cutting angles. But they really feel like a prototypical Denver Nuggets team now. With the pace, how hard they drive, how much pressure they put on you in the paint at the rim. Offensive glass, all of those things are like the Denver Nuggets teams from the 80s and 90s and I think that’s the image that they wanted. And they’ve done it well. They put up points as well as anybody.”

Jamal Murray on free throws. Jamal Murray stepped up and coolly made two free throws with 9.5 seconds to play that helped seal the game for the Nuggets. Murray is as ultra-confident as they come, but pressure is pressure and he was under a ton of it in that situation.

What was he thinking?